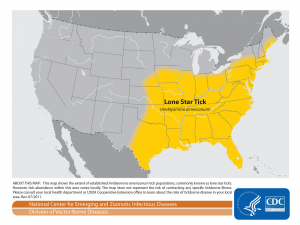 We all know that a bite from a tick can be accompanied with many nasty diseases, but the bite from a Lone Star tick can come with a shocking side effect: a red meat allergy.

National Public Radio reported the story of Laura Stirling from Maryland, who last summer was walking her dog in the woods and then found a tick on her. A few weeks later, after she had an Italian pork sausage for dinner, she had a horrible reaction. The reaction occurred six hours later, which is usual with a food allergy.

These types of tick bites are on the rise. Ten years ago there were only a few dozen cases, but now there have been 5000 reported cases in the United States. The range of the Lone Star tick has expanded from the Southeast up toward New York and Maine.

Dr. Scott Commins, an allergist and associate professor of medicine at the University of North Carolina, Chapel Hill believes that people can outgrow this allergic reaction if they avoid additional tick bites.